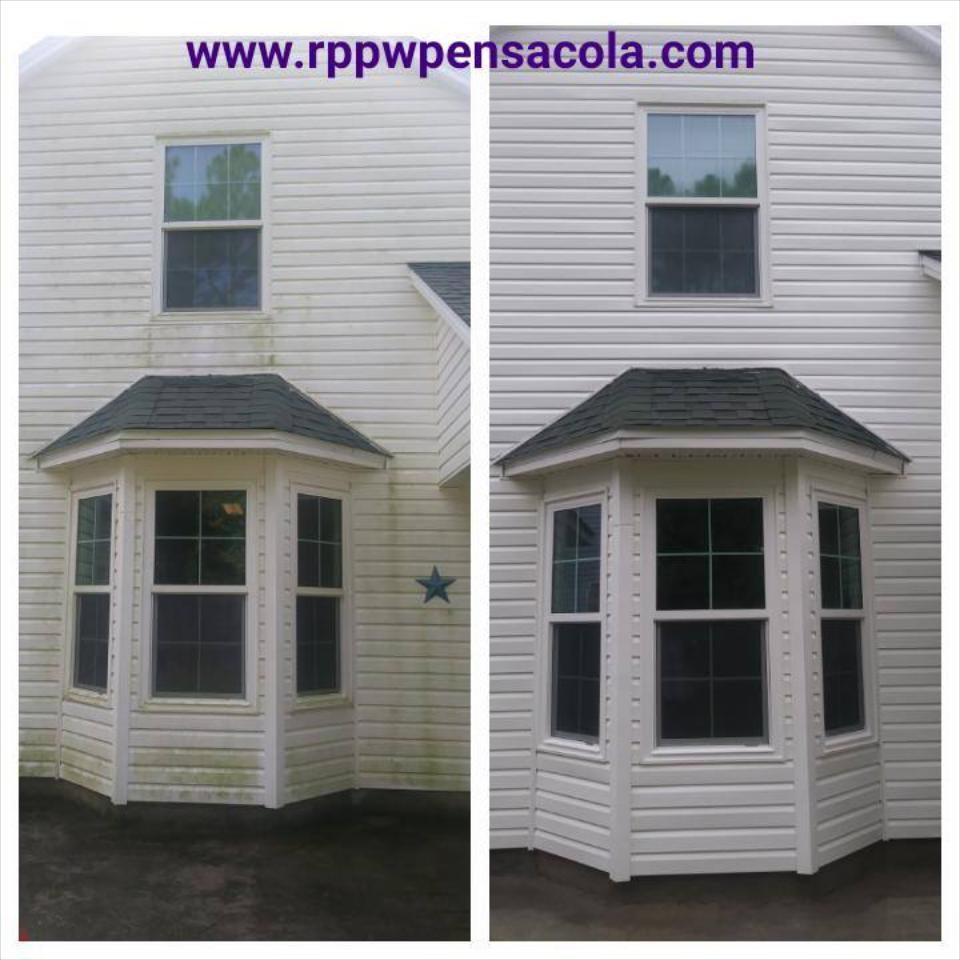 We use soft washing to safely remove algae from wood and vinyl siding. Safe exterior house cleaninging in Pensacola.

Robert Parramore's Pressure Washing is committed to helping all of our customers in keeping their property beautiful all year long. Mulch is beautiful, but it can contain something called artillery fungus which spreads fast and is very difficult to remove unless it is caught early. So lets talk about artillery fungus
The artillery fungus, or shotgun fungus, is a wood-decay fungus that likes to live on moist landscape mulch. The worst thing about this fungus is that it shoots spores up to 20 feet, which often land on siding, cars and anything else that surrounds the mulch. This year we’ve had a lot of customers come in with this problem and ask for mulch recommendations. Unfortunately no natural mulch can resist the artillery fungus – Penn State has tested 27 different kinds of mulch and found that with enough time all of the mulches were supporting the evil spore-shooting mushroom. The only way to ensure that artillery fungus never comes back is to take out the mulch completely and replace it with stone, artificial mulch or ground-cover plants. However, if you dislike stone and still want to replace the fungus infested mulch with organic mulch.  Generally, the key to preventing the artillery spores from ever sprouting is refreshing your mulch regularly.
As far as getting rid of the spores on your siding – that’s not a fun job. The most important part is to get them quick, as they are covered in sticky substance that will stay on the siding for good if not taken care of in a timely fashion. New vinyl siding that still has an oily residue on it can be power-washed within the first week. In other cases power-washing will be fruitless.  Scraping the spores off one-by-one with a scraper or steel wool is tedious but effective. After that there will still be a stain left, which can be taken care of with an ink eraser or possibly bleach. Bleach, Simple Green, toothpaste and alcohol-based mouthwash have been known to work with various rates of success, and can be tried first before attacking the spores with a scraper.  For removing spores off of cars oil, vinegar, car wax and tree sap remover have all worked for people that tested them.
The bottom line is that no organic mulch is completely safe from the artillery fungus. If you know that shotgun fungus has been attacking your neighborhood switching to stone in the areas surrounding the house would be the safest choice. If you simply can’t stand stone, then refreshing the mulch every year would be the second best thing to do.
Contact Us